Danny Lee became the ninth first-time winner on the PGA Tour this season, capturing the Greenbrier Classic in a playoff with David Hearn, Kevin Kisner, and Robert Streb. Lee won the U.S. Amateur Championship in 2008 and turned pro after the 2009 Masters. He had five top ten finishes before this victory. Kevin Kisner is still looking for his first PGA Tour victory after his third playoff loss this season.

Because the final leaderboard was so bunched up, Danny Lee only beat the field by 2.3 strokes per round. (Winners beat the field by an average of 3.5 strokes per round this season.) A little more than half of Lee’s total gain on the field came from putting (where he was ranked 7) and a little less than half came from his approach shots (where he was ranked 11). After the round Lee said, “For some reason I just read the greens really nicely here. I feel like everywhere on the green I just feel like I can make every putt, so all I was trying to do is hit the fairway and just trying to get it on the green somehow and try to give it the best chance with my putter.” Here’s a round-by-round strokes gained breakdown of Lee’s play at the Greenbrier:

Robert Streb broke his putter when he tossed it to his caddie after completing the ninth hole in the final round. Streb gained 1.5 strokes with his putting in the final round, which ranked 12 in the field. He gained 0.9 strokes using his putter in the first nine holes and he gained 0.6 strokes using his 56-degree sand wedge on the green in the second nine holes. Streb’s back nine sand wedge putting included one-putts from 1, 4, 6, 10, and 27 feet, two-putts from 13, 35, and 36 feet, and one three-putt from 24 feet. 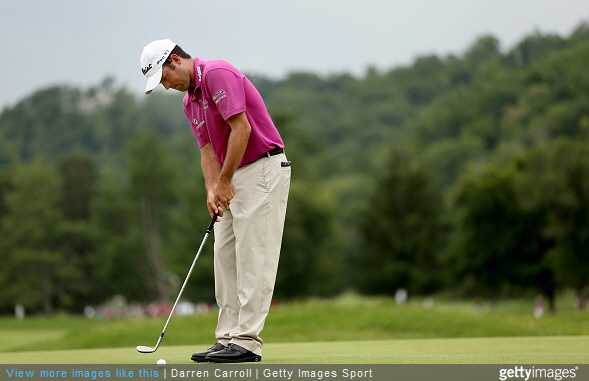 Former World Number One Tiger Woods led the field in approach shots, gaining 2.1 strokes per round on the field. Here’s a round-by-round strokes gained breakdown of Woods’s play at the Greenbrier:

Here’s a strokes gained breakdown of the top twelve finishers at the Greenbrier:

Here’s a strokes gained breakdown of the final round for the top twelve finishers at the Greenbrier: